I just realized I never posted this from last year... So here is a throw back race report to a great marathon last year.  I didn't reread it so no promises on if it makes sense!

If you aren't a runner and aren't interested in all the details I'll give you the short of it so you can move on. It was a great event with wonderful support and a great course. I had a fantastic day running even when I didn't think I was we'll prepared. I surprised myself with my endurance and finished in 4:22:48 which was 8 minutes faster then my A goal and was almost a 40 min PR from my first marathon. I had a wonderful weekend and this race was everything I hoped it would be when I decided I wanted to run it years ago. I would recommend it to anyone looking for a fun race with a smaller feel then the mega races.

Ever since I did the Flying Pig half marathon 3 years ago, I decided that I wanted to do the full race if I ever did a full. Well this year I decided I would come back to Cincinnati and give it a fly. It's nice to visit family and catch up for the weekend. We went to the expo (which is huge) and enjoyed buying fun stuff. I was never really sure that I was going to have a good race though. I hadn't trained great, even though I had some great races earlier in the season, and my eating for race weekend wasn't ideal.

Race morning we got up and drive 45 minutes into Cincinnati. The worst part of traveling to a race and not staying at the start is driving and parking. I did get lost with the closed roads once and had a small panic attack, but got myself back on track and got parked. Walked about 1/2 mile to the start line, found baggage check and the porta John. As I walked to the start line I saw another OK runner with a red coyote shirt on, and someone in my corral recognized our race team name. It was pretty cool. A different atmosphere at the start with songs and excitement, but as the race started they played Sweet Caroline for Boston. It was awesome. Took about 7 minutes to get to the start. And when I started running I discovered I made the ultimate runners flaw- doing something for the first time on race day. I added an extra pouch to my Spibelt and it was bouncing like crazy. Immediately had to stop and move my phone around to remove some of the extra weight. It still bounced but I was able to ignore it. 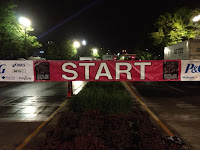 First few miles were very congested and hard to run through. I figured the slow 10:40 pace I was running would be typical for most of the day so I settled in. We ran over a bridge into Kentucky for a few miles then back into Ohio around mile 4. I looked down and first discovered that I had run an extra quarter mile in the first 4 miles, then I noticed that I had really picked up the pace and was pulling off 10 minute splits. Mile 5 ran through a downtown street and it was packed with people cheering. It was so an uplift and exciting. First 5 splits were 10:46, 9:56, 9:52, 9:53, 9:40.
Mile 6 starts a 2 mile climb through Cincinnati. The first time I ran it I remember think that there was no way that I could train for something like that in Oklahoma. Well I remembered that this time and I trained on a treadmill once a week. It worked,hills were like speed bumps. Didnt slow me down!  About this time I realize I am catching up to the 4:30 pace balloons. I looked down at my watch to discover I had cut my average pace down to 10:00. What??? I hung with the pace group for a few minutes thinking that I would need to slow down soon, but it was quickly obvious that they were running below my level for the day, so I jetted off. Definitely figuring that when I started walking they would catch back up. When we came to the split for the half marathon we also started going downhill.  Downhill is an oxymoron because every time I went down there was another steep jump up 5 steps later. I was feeling great though so I kept rolling figuring I should hold onto this as long as possible. Splits to the half were 9:46, 10:06, 10:02, 9:32, 9:33, 9:50, 9:42, 9:40. I am really shocked looking at this how many miles I ran sub 10, and well below 10. My half time was 2:11:25. 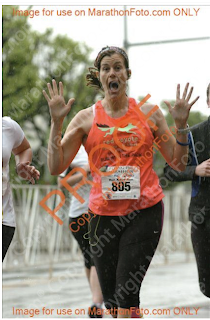 At the half point I thought that I was doing great but knew that was were I hit the wall in my first half. Luckily there were so many more spectators and runners to keep me going. I went right last that fear and kept running. I took gels every 5 miles religiously, and I was really thirst for some reason so usually took a little bit of water almost every mile. It seemed like we were going out on the course forever,but around 16 we finally turned back towards the city.

As we started to go back I could feel a little exhaustion coming in, but I told myself that I wasn't allowed to be in pain until atleast mile 20 so I dug deep and kept going.  At mile 18 we swung onto the highway for about 2 miles, interesting. Then we went back onto the city streets, which was pretty ghetto. Not much for spectators and I was starting to feel it but I just kept running, there were only 6 miles left, not much at all right?  Splits to mile 20 were 9:43, 9:52, 9:59, 9:49, 9:53, 9:55, 9:56. Can definitely see that after mile 15 I was starting to get a little tired but still had steady splits. 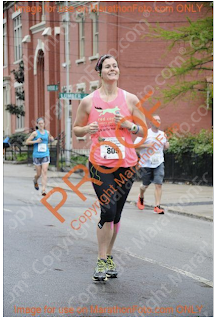 
Everything about the race weekend, race related, was perfect conditions for a great race. The weather was around 57* at the start with heavy cloud cover. The first few miles were a little muggy, but occasional showered quickly made it pleasant and great running weather. The crowds were fantastic along the course with high spirited cheers and excitement from bands and posters. The water stops were set approximately every mile which was great for hydrating when I needed to but not having to worry when the next stop would come. The course was fantastic with great scenic views of the areas and just the right amount of terrain variety to keep my legs from becoming numb. Even the hills were welcomed as they helped to stretch out my calves and reactivate my mind. I had a fabulous time at this event and it was everything I hoped it would be when I said years ago that I wanted to do it.
I am sure that I under achieved on my first marathon, who doesn't. When I selected 4:30 as my target goal for this race I really thought it was a pipe dream, so I was afraid to push myself too hard and crash along the way. IF I ever do another marathon I think I will have a better view of what I can achieve. I never really hit a wall this time, my mental prep and during race psychology worked great to keep me from giving up and my hydration and fuel kept me from bonking. I think I could have pushed my legs harder from 22-25 but I was afraid to because I didn't want to stop running when I was so close to completing the entire thing running.  Maybe one day I will try again- I mean how will I ever qualify to run Boston if I never run another marathon??? 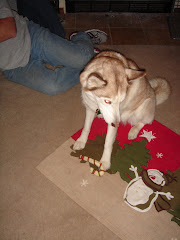 In memory of Daisy, my first and best running partner! ~mommy kt

KT with daisies
Depends on what side of me you know, sometimes i'm crazy, sometimes I'm quiet and sometimes I just couldn't tell ya.